September is Heritage Month in South Africa, with the 24th of the month being the actual Heritage Day. This is a day when South Africans celebrate their rich cultural diversity, which is core to the country’s heritage. As part of celebrating Heritage Month, we showcase the magnificent and extraordinary Makgabeng Mountain and plateau, show here in the main image. Located in the Blouberg region of Limpopo province,  this site is one of the oldest deserts on earth and dates back 2 billion years. The P.E.A.C.E. Foundation has strong links to this area, which has over the years become home to a variety of our projects, which is why we have chosen the plateau to represent our main image.

HISTORY OF THE MAKGABENG ROCK ART

The Thabana Nhlana on the Mkagabeng mountain plateau was first inhabited by the San hunter gatherers who migrated from somewhere around central Africa to Southern Africa, centuries ago.  The group moved via Botswana, Zimbabwe and Mozambique till they reached the shore and some  settled in areas such as the Limpopo region of, Eastern Venda and the  Makgabeng Mountain in the Municipal District of  Blouberg. They lived in these areas for about 2000 years when they were joined by the Khoen-khoen.  The Khoen-khoen were farmers and they brought with them  animals such sheep along with skills such as the art of making pottery and art work depicting cultural events, painted within the many caves in the area.  Later other groups such as Babirwa, Dibata and Bahananwa joined them. The Bushmen, Khoe-khoen and Bahanawana  left their legacy in the form of rock art. About 690 rock art works  were documented during the archaeological survey of the caves in the mountain, undertaken by Paleao-Art Field Services, conducted with the help Wits University and other volunteers. This is considered to be one of the largest concentrations of this period of Rock Art, globally.

As part of celebrating their rich culture and heritage, the P.E.A.C.E Foundation continues to promote the Makgabeng area as a tourist destination, incorporating the Makgabeng Lodge, located in close proximity to the Mountain. Over the years and through commitment from Dr. Tlou Setumu, an associate of the Foundation, and a well know authority on local history and culture, we have conducted a number of clean up campaigns during which a number of participants, mostly women, took part clad in their traditional attire. The clean-up campaigns doubled up as a celebration of the local culture, as traditional dance groups would provide entertainment at the end of the campaigns. 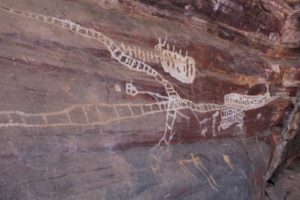 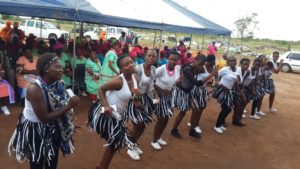 Funded and supported by ERP, Waterberg Wave FM Radio Station participated in this year’s Marakele National Parks (SANParks) free access week on the 16th of September 2022. This initiative in partnership with Total South Africa and First National Bank, is in line with the SanParks vision statement of “A Sustainable National Park System Connecting Society” and provides an opportunity for community members to experience the local heritage, whilst appreciating the natural beauty of the Marakele National Park. Waterberg Wave also ran an on air  promo in marketing the activities.

In addition, ERP’s Letticia Mahlatji and her team conducted an outreach programme aimed at raising awareness on the importance of appreciating the area’s heritage, whilst also addressing issues around rhino poaching and climate change. These pertinent issues have a direct effect on the provision and preservation of present day natural resources for future generations. In total, 60 communtiy members representing 9 villages, converged at Nkidikitlana Village for this programme. 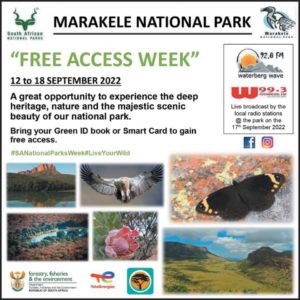 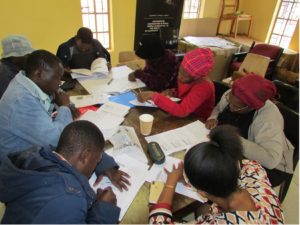 With all Covid-19 lockdowns having been lifted, our Waterberg Wave FM once again participated in the 6th anti-poaching annual public speaking competition held at Lapalala Wilderness School. This year’s event saw 63 learners from 18 schools in the Waterberg region participating in a public speaking and debating session centred on the social, political and economic impacts of rhino poaching in South Africa. Various prizes, including a laptop, printer, stationery and school uniform vouchers were up for grabs for the best debaters. The commemorations are an annual event funded and supported by My Planet Rhino Fund, Lapalala Wilderness Staff, Waterberg Biosphere Reserve, Waterberg Rhino UK to mention but a few.

With regard to the radio programming, Letticia managed to cover a number of topics including  arbhor week and how this also speaks to heritage issues, invasive species for biomass economy, waste pickers and international ozone day and the importance of coastal clean ups. This was over and above her daily ERP programme focusing on conservation and poverty alleviation issues. 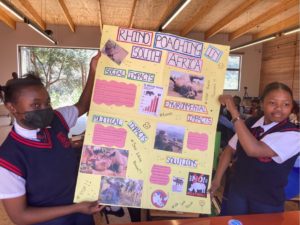 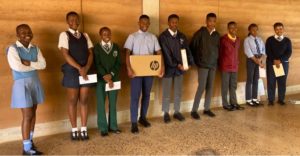 In recent weeks, the Centre has provided basic computer training programmes to youth in Vaalwater. In total, 79 leaners had the opportunity to do computer training, covering all the basics including use of Microsoft programmes, file and document management and use of emails. The Centre also provided a similar course for Early Childhood Development practitioners in and around Vaalwater. Both these courses were a huge success, and plans are now under way to expand the course to more schools and community members. As a positive spin off, the Centre’s revenue has also increased as most participants of these programmes have been doing word of mouth marketing of some of the services provided at the Centre, including photocopying, printing and CV typing. In addition, participant testimonials have shown that some of the participants, especially the ECD practioners, had never, previously, been exposed to a computer which- made this training programme a life changing experience for them. 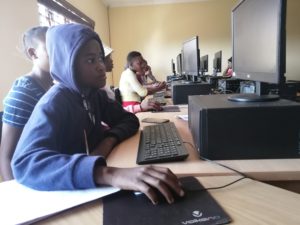 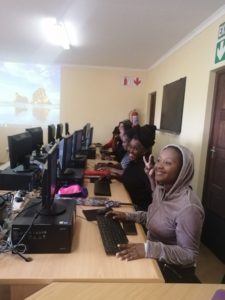 The Centre continues to support learners with school based research. In recent weeks, there has been  a surge in the number of learners accessing this service, and the Centre has had to adjust the schedules in order to control the numbers per each session, whilst also ensuring that everyone has access to this support service. In addition, as part of their outreach programmes, the Centre celebrated Heritage Day through a double barelled sports tournament, which also aimed at raising awareness around Gender Based Violence which is a serious societal issue in South Africa. Lastly, the Centre  provided food parcels to orphans and the vulnerable living in and around Vaalwater during the month of September, a goodwill gesture we applaud and support. 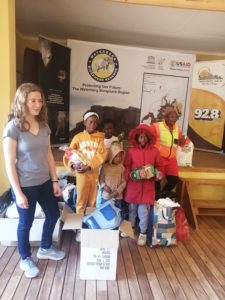 The Cooperative continues to clear and prepare the land for a new chilli crop. They also managed to adress a few maintenance tasks, including assessing and attending to any damage on their irrigation pipes. With regard to their apiculture project, the group continue to assess hive occupancy as some of the bee hives now contain honey, while some are still without. All corrective measures are being investigated to ensure that all hives are fully occupied as soon as possible. Their aim is to sell the honey, by December, in time for the holiday season. 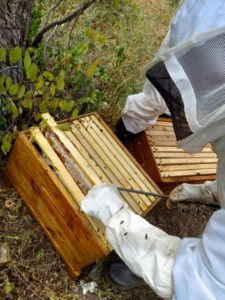 Eric, the locally appointed mechanic in charge of maintenance of the bicycles, recently donated to school children in Madikwe, continues to monitor the usage of the bicycles, ensuring that any necessary repairs are effected during each monitoring session. We are pleased to note that the beneficiary students continue to utilize their bicycles and this has motivated ERP to, once again, deliver an additional fleet during the month of October. We will provide an update on this delivery in our next report. 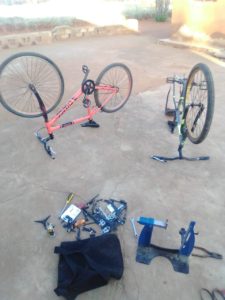 This group of previously unemployed youth have, after going through training in both Apiculture, as well as in the ethics and obligations pertaining to  Cooperatives, recently began harvesting and extracting their honey, which is sold to Portia Morudi who bottles and brands it as  ERP honey. Portia is currently going through a rebranding and bottling process in keeping with high brand marketing of the honey.  The bottles and labelling will be redesigned in keeping with the marketing of the honey, not only in high end stores, but also in keeping with the expectation of corporate gifts, particularly in view of the approaching Christmas and Festive Season.

The Cooperative has continued with their waste collections. The sale of  their plastic and aluminium recyclables, provides them with an improved monthly income. They will soon be receiving seedlings for their food for waste programme, thanks to intervention by Samuel Matheta, our bicycle mechanic for Limpopo, who managed to secure a donation for these seedlings locally. 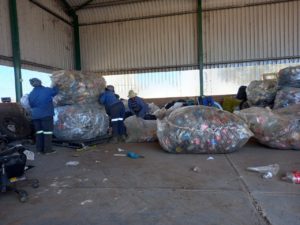 The dog training programme continues at Madikwe, and we are pleased to report that all canines are adapting and responding well to the training and various commands. Some of the dogs have started showing early signs of biting, a good sign given the tasks that lie ahead especially with regards to ERP’s  anti-poaching strategy. A SHOWCASE ON MAKGABENG FARM LODGE

Makgabeng Farm Lodge is a family enterprise established in 2010 to provide local and international tourists with leisure and accommodation within a serene rural environment. Run and managed by Fortune and Lorraine Mabeba, the lodge seeks to share an enriching experience of culture, history, heritage, and spirituality of the Makgabeng area.

Apart from Fortune, being a longstanding Member of  the P.E.A.C.E. Foundation Board of Trustees, both he and Lorraine have provided enormous support and mentorship  to our Ntshabeleng Waste Cooperative as part of their enterprise outreach programmes. We express our gratitude to both of them for this continued and much valued support and mentorship.

To learn more about Makgabeng Farm Lodge, visit their website on https://makgabengfarm.co.za/ The Ndumo Schools Orphan Project (NSOP) was established circa 2002, by a group of school principals and teachers who were troubled by the significant level of absenteeism amongst their pupils. Upon investigation, they discovered that an alarming number of these children were orphans and/or  vulnerable children who were being left to fend for themselves, either due to losing one or both parents as a result of the HIV/AIDS pandemic, or being left in the care of an elderly relative by migrant worker parents. It became evident, on investigation that many didn’t attend school as they didn’t have requisite clothing. The NSOP initially focused on providing these children with food parcels supplied at the time by the Catholic Church.

For as little as the equivalence of $15 a month, you can support an orphaned or otherwise vulnerable child with a supply of ePap for an entire month. Join and support our cause by clicking on the link below: 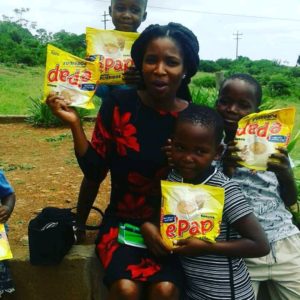